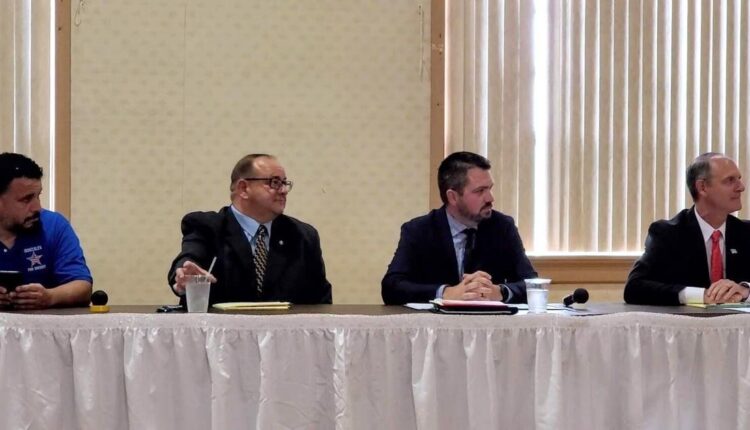 Republican hopefuls vying for Kenosha County’s top elected law enforcement leadership post made their cases for why they should become the county’s next sheriff during a candidates’ forum held Tuesday night.

The four will square off in a primary election scheduled for Aug. 9. The top two vote getters in the primary will be on the ballot for the general election to be held on Nov. 8. Also vying for sheriff is Kenosha resident James Simmons, a deputy in Lake County, Ill. and the only Democratic candidate on the ballot.

Sheriff David Beth, a Republican, is not seeking re-election, announcing four years ago before the 2018 election he would not be running again this year.

During the forum, which was held at the Italian American Club in Kenosha, the four candidates addressed a range of topics that included elected officials’ response to the city’s riots in 2020, along with citizens’ rights to bear arms were among the top issues discussed .

Candidates were asked what they would have done differently in responding to the riots that ensued following police shooting of Jacob Blake in August of 2020.

Zoerner said the no. 1 thing he would have done differently was calling for help immediately.

“The minute we were surrounded the sitting sheriff has the authority to contact the general with the National Guard and he is the contact personnel at the governor’s office. That’s how it works,” he said. “It is the sheriff’s responsibility. Moral responsibility to take care of us… and that is what we have to do.”

“He did not send the necessary help that we needed. He minimized this. A lot of this could’ve been alleviated had he sent down the troops that we’d asked for,” Rowe said. Rowe said he would’ve also asked immediately for mutual aid from other agencies, as well. Eventually the mutual aid did come from across the state.

Cochran said the response to the riots was one of the reasons that drove him to run for office. He, too criticized elected officials’ “lack of urgency” and communication with the public and vowed to conduct “monthly table top exercises” to prepare for such incidents.

“I would also make sure that egos do not get in the way of public safety,” he said.

Gonzales said that in hindsight, the “boots on the ground did what they needed to do with what they had.” He said he would call for better coordination between law enforcement adding more protection for the fire department so they could put out the fires and had local officers assist the National Guard trying to find their way through Kenosha.

“The other thing I would’ve done? God honest, I would’ve looked at those people that were starting to become rioters, quite frankly, I would ask the fire department why don’t you turn your hoses on those folks?” he said, drawing applause until forum facilitator Brian Thomas, who is also on the County Board, asked that they withhold such response.

Candidates also addressed the issue of the Second Amendment and the right to carry concealed weapons in public places. The County Board is in the process of repealing the ban of guns in county-owned public buildings and allowing concealed weapons in buildings other than areas such as the jail, detention center and the courthouse.

All four candidates said that law abiding citizens should be able to carry concealed weapons.

Rowe said he had “some reservations” about residents, other than law enforcement carrying concealed weapons in county buildings, and that most people agree that there isn’t a need for guns in those buildings.

He added that even those with concealed carry aren’t “always thinking straight” and could lead to putting people in jeopardy.

“We don’t really need the vigilantes to be in these buildings when we have sheriff’s deputies patrolling those buildings that are carrying a gun,” he said.

Cochran said a “lawful carrier” of a firearm should be able to carry wherever they would like.

“How many times have we seen someone turned away because they see a sign that says `No Guns Allowed’ that they want to harm someone? It doesn’t happen,” he said. “If we can law-abiding citizens lawfully carrying, we can potentially save lives.”

Zoerner said his sister, who had been in a domestic violence situation, rebuilt her confidence when her new boyfriend taught her how to use a weapon to the point where she no longer carries one.

“I’m here to tell you, I support carrying concealed law-abiding citizens that are legally armed in permissible county buildings,” he said. “That’s where I stand on it. I’m not going to waiver. I want you to have the right to carry a firearm anywhere you legally can.”

Gonzales said that people who carry concealed weapons commit “far less crimes than anyone else.” According to Gonzales, the vigilante argument was unfounded.

“When you have the chance to protect yourself and you’re able to use a gun safely, that’s what you should be able to do,” he said. “Because in this country, there’s way too many times and we’re never going to take them away from people and the bad guys are always going to have them. They can care less about any signs that you put on the door.”