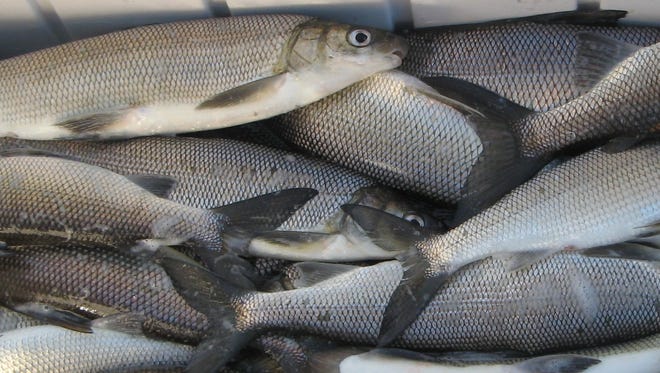 Authorities have convicted 13 people from three states for poaching lake whitefish from the Menominee River, in some cases burying the fish or hiding them in vehicles to evade wardens, according to the state Department of Natural Resources.

The poachers were accused of illegally taking hundreds of vulnerable spawning whitefish, sometimes by snagging them in the body instead of hooking them in the mouth, said DNR Marine Warden Jeff Lautenschlager.

Eleven of the violators were from Illinois. Lautenschlager said they were operating in “a couple different groups or cliques that were definitely together or rode up together in the same group.”

The other two violators were from Wisconsin and Michigan.

The case began in 2019 when DNR wardens from Michigan and Wisconsin learned of these “organized” attacks on the lake whitefish. The Menominee River runs roughly along the border of both states and enters the bay of Green Bay between Marinette, Wisconsin and Menominee, Michigan.

With logistical assistance from the Illinois DNR, officers continued investigating through 2020 and into 2021, finding the violators were “strategic and intentional,” Lautenslager said.

“The lake whitefish in this river are particularly vulnerable during the late-year months,” he said. “They congregate in the up-river systems in Wisconsin every fall for their annual spawn.”

In Wisconsin, fish can be kept only if they’re caught in the mouth, but those charged were also keeping them if they were hooked in the back, belly or tail, Lautenschlager said.

Snagging fish involves casting a lure or a hook in “a ripping or jerking fashion, just trying to basically hook the fish as it’s swimming through the water column,” he said.

More:A bald eagle found hurt by the side of the road on the Menominee Reservation has a second chance at life after rescue

The presiding judge revoked the eligibility of the violators to receive DNR licenses for a total of 24 years, although at least one person’s eligibility was not respinded. The judge also ordered that 91 whitefish be confiscated.

When the violators were first contacted by wardens, “they were hiding fish in brush, burying fish, hiding fish in false floorboards in vehicles, things like that,” Lautenschlager said.

Most of the offenders were repeat violators, the DNR found.

“The DNR wardens and investigators in this case remain hopeful the removal of these numerous violators will make room for the legal and ethical individuals who enjoy viewing and legally fishing lake whitefish,” Lautenschlager said. “The laws we have are specifically to protect this valued and vulnerable fish species.”

The investigation also led to a 2020 Michigan case in which Michigan residents were found to have shined and shot deer in the area while holding a flashlight in their mouths, killing deer at night and hunting deer without a license.