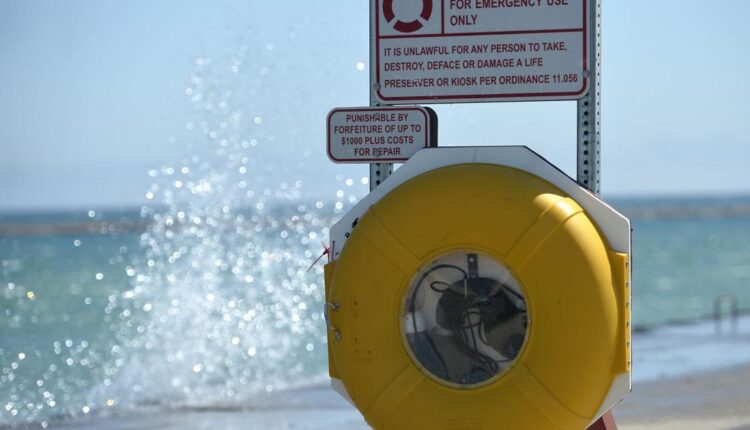 With 13 miles of public access along the shoreline, Lake Michigan is among the most attractive recreational assets in Kenosha. However, the lake also can be dangerous if people are not aware of its strong currents or don’t follow water safety practices. As we head into the warmer months, people are reminded to enjoy the water in a safe manner.

Kenosha Fire Chief Chris Bigley said people should stay away from dangerous areas in the water, including the Pike River and the North Pier. Kenosha’s iconic pier and Pike River mouth have the unfortunate distinction of leading the area in drowning deaths. While the drowning rate nationally is highest for children under 5 years old, it is also a leading cause of accidental death for people of all ages.

The City has installed signs warning about the dangers of jumping off the pier and swimming in the Pike River, where there are strong currents. There is a city ordinance that prohibits swimming within 50 feet of the North pier that carries a $1,000 fine. It is also illegal to swim more than 50 yards from shore or swim within 150 feet of the mouth of the Pike River, which empties into Lake Michigan near Pennoyer Park.

The Kenosha Fire Department includes a message about safety around water with their fire prevention presentations to school groups. Students are encouraged to take a pledge they will not jump off the lighthouse pier into Lake Michigan or swim in the Pike Creek – and will discourage friends from taking those risks.

Kenosha’s police and fire departments have joined with other local businesses and agencies to form a Safety Around Water Coalition to educate the public and reinforce the potential dangers of Lake Michigan, in response to a number of drownings in Kenosha in past years. The coalition has developed school programs and public safety talks, as well as messages on social media and traditional media to educate all members of the community on enjoying the water in a safe manner.

The City has installed life rings in several key locations (near the mouth of the Pike River, on the South Pier, and on the North Pier). It is safer to throw the life ring to a person struggling in the water, rather than attempting to jump in the water to save the person, Bigley said. “In case of a person in trouble, bystanders should first call 911,” he said. “They should continue watching the person and note where they are last seen,” so they can notify the emergency responders.

Common Council President Ald. Rocco La Macchia Sr. said: “We consider Memorial Day the start of summer. I hope we have a safe Memorial Day and a safe summer. Please be careful when swimming in Lake Michigan. And please do not jump off the pier, it’s very dangerous.”

Chief Boatswain’s Mate Bill Pullins with the US Coast Guard station in Kenosha reminded citizens to be prepared for emergencies while boating this summer. “Make sure you have all of your safety equipment in order and some form of communication, such as a marine radio or a charged cell phone,” he advised. “Also make sure someone knows your plans.”