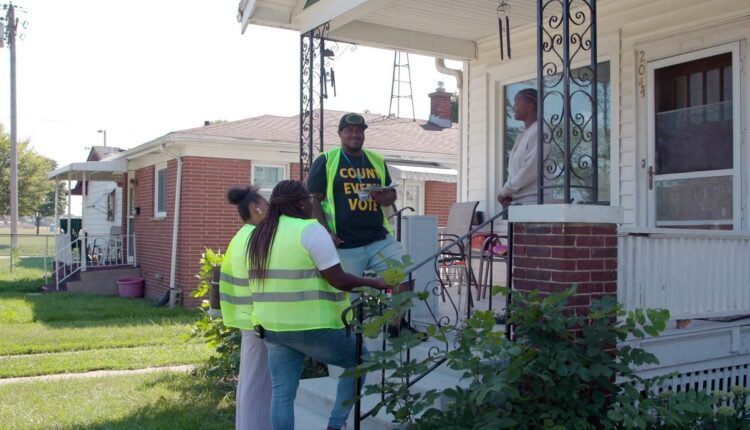 Outreach workers are hitting the streets to get out the Black vote ahead of the November 2022 elections.

“I feel like I’m lacking a little education … because I don’t know who to vote for,” said Miracle Holmes.

Voters like Holmes welcome the personal time and attention of people coming to her door in Racine. She said that kind of interaction is what’s needed in the run up to elections.

“When you aren’t being engaged, you can’t help but to feel that you’re being ignored.”

There are nearly 250,000 Black residents in the cities of Milwaukee, Racine and Kenosha. Those residents, however, have long said that elected officials, politicians and their campaigns have neglected Black communities.

“I think why residents have felt ignored because largely we had been,” said Angela Lang, a political organizer based in Milwaukee. “And I think 2016 proved it.”

In response to that neglect — and to help Black residents make their voice heard — Lang created the Milwaukee group known as BLOC — which stands for Black Leaders Organizing for Communities.

“BLOC is a year round civic engagement organization that launched after the 2016 election. In some ways, people were very frustrated by the lack of engagement. I personally was very frustrated to hear from Democrats and progressives that said, ‘If you people would have just come out, we wouldn’t be here.’ And I thought that was a completely misguided interpretation of the election because our community is some of the most disenfranchised and least engaged, but yet we were to blame,” Lang said.

“We want to make sure that we’re building long-term Black political power. We want to make sure that people feel that they have access to democracy and that they can fully participate in it because they know how democracy and these institutions function, “Long continued. “I think a lot of times we think of civic engagement as just voting when it’s so much more than that.”

Since its creation after the 2016 election, BLOC has grown to upwards of 50 so-called ambassadors — employees that are knocking out on doors, engaging residents out in the community.

“Our bread and butter is really knocking on doors, meeting people where they’re at and asking the question, ‘What does it look like for the Black community to thrive?'” explained Lang.

With the success of BLOC in Milwaukee, the group expanded into the cities of Racine and Kenosha.

“Most of my job entails building relationships,” said Lue, who also manages the new Racine and Kenosha outreach program. Lue has her team knocking on doors in these two cities a few times a week.

Among the primary issues that BLOC organizers are hearing from Black residents are concerns about affordable housing, safety, inflation and the need for family-supporting jobs.

Lue said it’s important to get out and vote because of all that’s at stake.

“One of the things that I think really brought on concern for the Democratic Party is that the Black voters have been the backbone of that party for a very long time,” Shah said. “And I think 2020 reminded them that there are times when you cannot take that vote for granted.”

Although Black residents tend to vote for Democratic candidates, Republicans are welcoming those voters to their side of the political aisle, said Ken Brown, chairman of the Republican Party of Racine County.

“I’m excited for more and more Black voters turnout, because, as I said, we are one of the most diverse cities in America, in the state of Wisconsin. And a lot of black voters are coming in and they’re looking in a different direction,” Brown said. “They’re prosperous. We’ve actually had probably 30% of the new businesses that have opened in downtown Racine over the last couple of years are Black owned businesses. They’re working professionals. They’ve invested a lot in those businesses “And they want to succeed. I don’t think socialism, which is where the Democratic Party is today, is going to lead them to that level of success. So, I welcome Black leadership to come in and encourage Blacks in our community to.” look at the issues and look at the candidates and where they actually stand.”

While BLOC is not affiliated with the Democratic Party, Angela Lang says the group does endorse candidates and for the 2022 elections, those have been Democrats.

But how vital is the black vote for Democrats in statewide races?

“There’s no way to win a statewide race without the Black vote, specifically Milwaukee, but then also Racine and Kenosha,” said Lang

“If you don’t court our vote, you don’t engage us or we just don’t feel excited enough then we risk people staying home,” said Lang.

“We know Black folks are going to play a super important part,” he said. “We know we’re going to be the deciding factor and that means we have a lot of work to do to meet that moment and make sure we’re getting our communities out here to vote.”