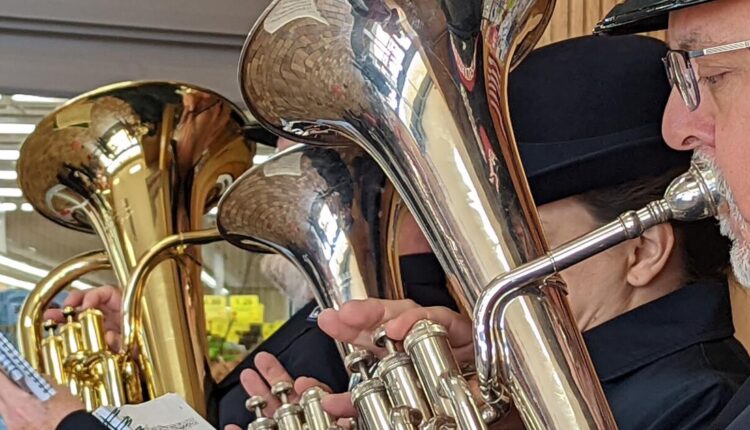 Yes, we’ve been seeing Christmas lights and inflatable snowmen in stores for weeks, but starting at noon on Friday, the season officially started.

On a sunny but blustery afternoon, the Salvation Army’s annual Red Kettle Campaign launched to the tunes of a traditional brass band.

While shoppers filed in and out of Woodman’s grocery store, familiar carols — “Hark! The Herald Angels Sing,” “Deck the Halls,” “Jungle Bells” — added a festive soundtrack to the brief remarks by Salvation Army officers.

Auxiliary Capt. David Hamilton thanked the many businesses, organizations and individual donors who contribute to the Red Kettles each year.

“And I want to thank our veterans, too, on Veterans Day,” he said, nodding to a group of veterans who were there at the launch.

Nineteen of the bright red kettles will be placed at businesses throughout Kenosha through Dec. 24, Hamilton said.

“And we’re still hopeful about getting a 20th kettle place,” he added with a smile.

This year’s theme is “Love Beyond Christmas,” he said. “It takes a community to keep the love going all year.”

“We help 350 families each month on average,” Hamilton said. “We’re taking applications now for toys for families, and our Coat Room has warm coats ready for people.”

He quickly added that the local Salvation Army “doesn’t do this alone,” listing several local nonprofit groups who all work together.

Nathan Michalski, vice chairman of the Salvation Army’s advisory board, thanked everyone for coming and said the Christmas season “is a time of year when we can bless our neighbors by helping each other. Let’s show our love not with our words but with our actions.”

Salvation Army Divisional Commander Major Steve Merritt — who was playing in the band Friday — said the Red kettle funds will “make an impact throughout the year. We pray for a successful campaign, and may God bless you all.”

Capt. Robin Hamilton, who moved to Kenosha about a year ago to lead the local Salvation Army Church with her husband, laughingly said the couple survived that first busy Christmas season and is ready to keep building here.

“Last year, we were still getting our feet wet,” she said.

David Hamilton added: “We’re hoping to engage more and more with the community. Our first year was constant busyness but also very fun.”

“People can sign up at registertoring.com,” David Hamilton said. “If it’s your first time on the website, it will ask for your location or zip code and that will send you to our scheduling page.”

“It would be great,” he added, “if we could have more volunteer wrestlers this year. If there isn’t someone ringing a bell, that’s a kettle not generating funds for the community.”