Madison Woman Finds Her Mission as an Advocate for Victims 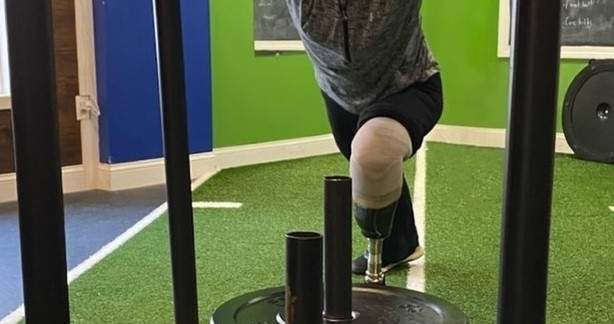 When longtime Madison resident Kathy Rasimas hopped onto her husband’s motorcycle and headed to dinner in October 2019, it was supposed to be a normal night out. She never expected it would become life-changing.

“I, unfortunately, live this all the time now,” Rasimas explained. “My husband John and I were on our last motorcycle ride of the season, just going out for dinner when a car pulled out of a gas station. [It was] clearly someone under the influence or a distracted driver, and [they] gunned it out of the gas station; hit the motorcycle. I was actually able to say, ‘We’re going to get hit’.”

The car, operated by a 16-year-old who was in violation of his permit, smashed into the motorcycle, causing it to topple and pinning Rasimas beneath its weight.

“The car continued on, apparently ran a stop sign, and hit another car,” she said.

According to Rasimas, it was quite clear that her husband John was rendered unconscious and she had been terribly injured.

“My first response was to ask if anyone had gotten the license plate because we didn’t know at that point that he had been stopped elsewhere,” she said. “The second question was to get someone to help me get a tourniquet around my leg.”

Although emergency services responded quickly, she and John were brought by different ambulances to different sections of the hospital. It was several hours before Rasimas knew if her husband had survived or how badly he had been injured.

“Neither of us had any idea what had happened to the other,” Rasimas recalled. “It was frightening. Extremely frightening.”

In the meantime, Rasimas was alone with her fears while doctors and hospital personnel worked on her leg which had been crushed beneath the topped motorcycle.

“They did multiple tests, every scan machine, x-ray. You name it, I went through it,” Rasimas said. “They finally delivered the news to me that they could not save my leg and that they had to amputate.”

After the operation, Rasimas struggled to overcome the pain while learning to walk and live without her left leg, now missing from the knee down.

“I was an extremely active person. I liked to hike a lot. I walked six miles a day. I babysat my grandchildren, and here I was confined to an alarmed bed at the hospital. It honestly opened my eyes to the world of being handicapped,” Rasimas reflected. “I worked in a lot of fields as a social worker. I’ve worked hospice, head trauma. I’ve worked in burn units. But I was never really aware until this happened.”

The impact of the incident upturned almost every aspect of their lives. While the couple faced renovations to widen doorways and made their home wheelchair accessible, adjusting to the new normal meant dealing with multiple surgeries, dealing with chronic pain, and discovering that retirement was anything but what Rasimas planned.

“I have chronic nerve pain,” Rasimas said. “I had a third surgery at Yale to try and help with the nerve pain. That unfortunately was not a successful surgery for me.”

She added that she has phantom pain and recently flew to Florida to a state-of-the-art facility to have a prosthetic fitted.

“Physically, I’m doing better. I am very determined. I am starting to hike again and being able to walk my 87-pound dog again, so I am hopeful,” she said. “I am a positive person and I won’t let this stop me from being a mother and grandmother and from doing what I want to do and what I need to do.”

What she says she needs to do is work to change attitudes and laws for juveniles and driving education. Rasimas is now an advocate in Hartford for laws that would allow the courts greater discretion when it comes to juvenile offenders. While the young driver of the car that struck her was eventually sentenced to 16 months in a juvenile detention center, COVID pressures on the penal system allowed for his early release.

“I feel like I was a victim of this boy and also a victim of the juvenile justice system as well,” Rasimas said, adding that because of his age, the driver was not held to a strict standard of justice. “I feel strongly that when someone commits a felony — no matter their age — [they] need to be held accountable.”

In addition to working in Hartford to change juvenile justice laws, she is also seeks opportunities to speak to young drivers about how devastating one small moment of distraction behind the wheel can be.

“I really am on a mission. I want to change juvenile justice laws. It is my goal now to contact driving schools and hopefully be able to speak to about distracted driving and to teach them that a car is a vehicle until you misuse it. And then it becomes a weapon,” said Rasimas. “I’m on a mission to wake up parents and wake up kids to this issue.”

Rasimas’ husband announced a campaign for 101st District State Representative in April. Rasimas says that she is focused on changing juvenile justice laws, how courts deal with young offenders, and increasing awareness about the dangers of distracted driving.

“This changed my life totally. It’s difficult to describe how much. I can hold my grandkids, but I can’t walk around with them. I am still unsteady. It has totally impacted my life,” Rasimas siad. “I fear that as I get older that I will be wheelchair bound before my time and that is scary. But at the same time I feel fortunate. I could’ve died that night, and for that I’m grateful. My mission now is to go to Hartford and try to change these juvenile justice laws.”

Three Things to Know About Insurance Coverage for Abortion