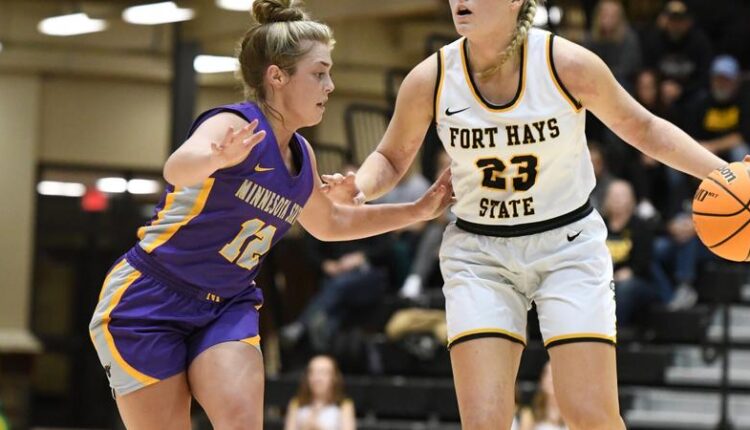 Mankato, Minn. — The Mavericks open NSIC South Division play at home facing Concordia-St. Paul this Tuesday at 7:30 pm MSU then continues on the road in Kenosha, Wis., facing UW-Parkside at 2:00 pm on Saturday.

Last time out: Last week the Mavericks picked up three nonconference wins. Minnesota State defeated North Central 110-42 at home, then traveled to Hays, Kansas to wrap up the weekend on a high note winning against two Mid-America Intercollegiate Athletics Association Conference. The Mavericks won 65-63 against Fort Hays State and 71-46 against Northwest Missouri State.

Preseason Outlook: The Mavericks are picked to finish first in the NSIC Preseason Coaches Poll receiving a total of 216 points along with eight first-place votes.

Player to Watch: sophomore Joey Batt was named the NSIC Player of the Year and MSU’s Player to Watch. Started and played in all 28 games and was named to 1st team All-NSIC. Led the Mavericks number one ranked NSIC offense in scoring averaging 15.5 points per game. Placed second in the NSIC in free throw percentage shooting 81.9% and set career high in scoring with 32 points against Concordia-St. Paul (11.23.21). First in the NSIC and 12th in the nation in assist/turnover ratio at 2.31. Second in NSIC in steals with 67 averaging 2.6 per game and hauled in 94 rebounds averaging 3.4. For the first round of the NCAA tournament she led Mavericks in scoring in NCAA Tournament against Fort Hays with 21. Named to NSIC All-Academic Team of Excellence.

About Concordia-St. Paul: The Golden Bears are part of the Northern Sun Intercollegiate South Conference and hold a record of 1-1 (0-0 NSIC). The team is coached by Amanda Johnson who enters her 8th season as a Head Coach.

The Golden Bears are averaging 64 points and 34.5 rebounds per game this season.

Tuesday’s game will mark the 45th meeting between both teams. Last match-up between the Mavericks and the Golden Bears was January 2nd of 2022 where Concordia-St. Paul prevailed in Taylor Center by two points (83-85). The Golden Bears lead the all-time series 23-21.

About UW Parkside: The Rangers are part of the Great Lakes Intercollegiate Athletic Conference and hold a record 1-3 (0-0 GLIAC).

The team is coached by Jen Conely who enters her fifth season as a Ranger.

The Rangers are averaging 69.5 points and 36.5 rebounds per game.

Saturday’s game will mark the eighth meeting between both teams. Last match-up between the Mavericks and the Rangers was on November 20th of 2021 where Minnesota State won in Taylor Center by 18 points (93-75). The Mavericks lead the all-time series 7-0.

Coming up: Minnesota State continues NSIC play on the road on Dec. 1 as it visits Winona State at 5:30 pm, and hosts Upper Iowa Saturday Dec. 3rd at 2:00 pm in Taylor Center.