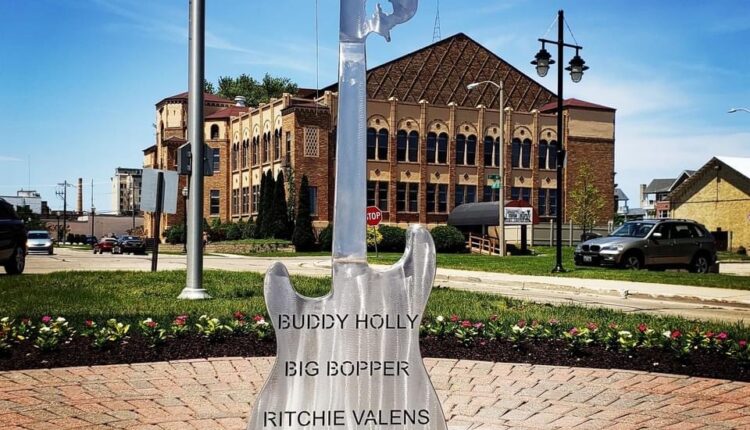 The famous Winter Dance Party Tour of 1959 that featured Buddy Holly, Ritchie Valens, The Big Bopper and Dion and The Belmonts is now forever memorialized with a uniquely designed artistic steel guitar. It’s located just outside the former Eagle’s Club where the Kenosha concert took place.

Kenosha was the second stop on the tour, but the 11th stop of the tour is remembered the most. The singers played the Surf Ballroom in Clear Lake, Iowa Feb. 2 and later that night in the wee hours of the next morning Holly, Valens and The Big Bopper (JP Richardson) died in a plane crash.

“We knew it happened there, but there’s nothing else in Kenosha that tells you it happened,” Guida Brown said. She and her husband, David McGrath, spearheaded the push for the monument. “We said we need to have a marker here.”

“The snowflake is for the Winter Dance Party, the guitar is for Ritchie Valens, there’s Buddy’s iconic glasses and at the top we have the telephone for The Big Bopper,” she said.

Kenosha, Wisconsin was the second stop on the Winter Dance Party Tour. It featured Buddy Holly, Ritchie Valens and The Big Bopper who would die in a plane crash after their performance in Clear Lake Iowa.

The telephone is a salute to The Big Bopper’s signature song, “Chantilly Lace.”

Brown said she and McGrath promote and sell items for Dion DiMucci, the Belmonts former lead singer and solo artist who went by his first name. Brown pointed out “The Wanderer” and “Runaround Sue” singer turns 83 next month and is about to head out on tour after releasing a new album.