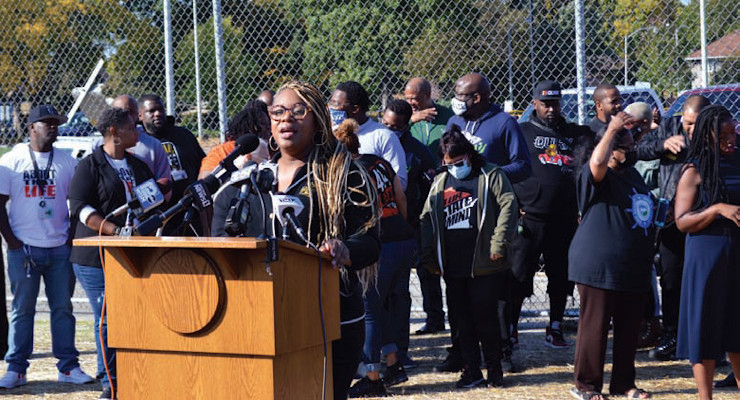 “We are not closed, we are not sat down and we are not silenced,” says Arnitta Holliman. “What we are saying is that everyone else in this community has to do the same thing: stand up, raise your voice and be with us in this work.” (Photo by Ana Martinez-Ortiz)

Last week, Sherman Park Community Association executive director Mabel Lamb, along with others from the Sherman Park neighborhood, walked along West Burleigh Street and North Sherman Boulevard with the District 7 Police Captain and community liaison officers. The group investigated the locations where there had been murders and non-fatal shootings.

“Over 31,000 people live in Sherman Park [and] we deserve a safe neighborhood, ”said Lamb. “What I’m going to ask the community is this: lay down your arms. We need peace. We need to be able to live safely in our communities. “

Lamb spoke with fellow community leaders at a news conference hosted by the Milwaukee City Violence Prevention Office at Sherman Park, 3000 N. Sherman Blvd., on Wednesday, October 6th. The group responded to the recent increase in violence taking place across the city, including a situation in which a young girl was killed and her sister was injured.

Arnitta Holliman, director of the violence prevention bureau, said the press conference was a show of support for community members and to remind the city that people are doing the work to prevent violence and to intervene when violence is present.

“It’s not just a job we show up to pick up a check for,” said Holliman. “We are here to heal ourselves and our community. And for that we need everyone’s efforts and everyone’s support. “

This work cannot be done alone, she said. It takes efforts from the people doing the work to those setting the budget to ensure that sufficient resources are available to address the issues.

Reggie Moore says, “It’s not just about programs to solve this problem, it’s about the solution of this problem for all of us who live and care for the city of Milwaukee.” (Photo by Ana Martinez-Ortiz)

Reggie Moore, Director of Violence Prevention Policy and Engagement at the Medical College of Wisconsin, spoke about the historic extent of violence in Milwaukee during the press conference.

Often times, elected officials say there aren’t enough resources to fund post-school programs or primary prevention, Moore said. He pointed out that through the city budget and funding from the American Rescue Plan Act, there is an unprecedented opportunity to invest in prevention.

Moore noted that sometimes people ask why there is another press conference. A press conference is a sign of unity and commitment, he said, and it shows that the preservation and safety of life is everyone’s concern.

Young people are often blamed for the violence, but it’s not just a youth problem, he said.

When we care about our young people, we cannot just take care of them when they are in trouble. We have failed our young people to respond to this pandemic and to invest resources in their recovery and the recovery of families who struggled before the pandemic. “

Moore encourages everyone to take action to combat violence in the city.

“Work starts now,” said Moore. “It’s not just about programs to solve this problem, it’s about the solution of this problem for all of us who live in and care for the city of Milwaukee.”

Gun violence, or exposure to gun violence, affects children physically, emotionally, and socially, Cargile said. He pointed out that there is also community trauma, which is the sum of individuals who have experienced trauma that can manifest as collective trauma in neighborhoods with increased violence.

“The peer-to-peer violence that is going on right now is not what our city needs or deserves,” he said. “It is imperative that healing be focused on serving youth and families affected by violence.”

“If you are involved or involved in anything that creates violence, please seek help,” says Mabel Lamb. (Photo by Ana Martinez-Ortiz)

Cargile said action is being taken in the right direction through avenues like the Blueprint for Peace, Cream City Credible Messengers and the Beyond the Bell Coalition.