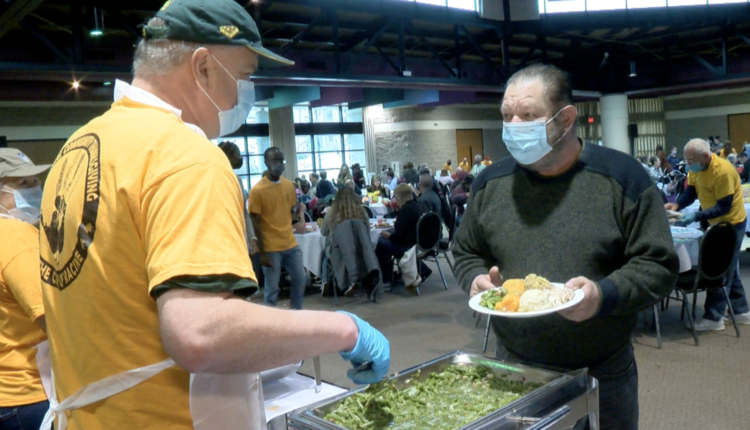 “I chose a little bit of everything because it looks nice and juicy and plentiful,” said Traneda Malott, who attended with colleagues from a local assisted living center. Residents of the center also came along.

“It gives the community an opportunity to meet, as well as individuals who have come into the community,” Malott said.

This was the 12th year Dan Johnson and Ray Stibeck organized the meal, but last year they only offered take-out dinner due to Covid-19.

According to Johnson, volunteers served hundreds of meals within the first 35 minutes of opening. For many, being together is just as important as eating.

“And they develop a friendship. And they meet around the same time every year and share stories. And sometimes they even meet outside of the event.”

Other people, like Tim and Jean Myers, came here, among other things, because their children are out of town for the holidays.

“I think it’s wonderful,” said Jean. “Dan and Ray did a fantastic job. We have been coming almost every year since they started. And of course it’s delicious. ”

Anyone can sponsor a table for $ 50. Hundreds are doing just that, and the money raised, more than $ 20,000, is used to pay for meals, according to Johnson.

And sometimes there are other donors.

“Some guy who came here to take apart turkeys gave us $ 1,000. And people like that are very excited for something like this to happen, ”said Johnson.

Especially during a very challenging year here in southeast Wisconsin.

“I’m really grateful to be here. I want to say how sorry I am for the people of Waukesha. And I hope everyone is fine out there,” said Will Shirley, a guest at dinner.

And eating wouldn’t be possible without volunteers like Sally Madden waiting to try the pumpkin pie until everyone else was served.

“To reach people who may be alone, who are sad, who know their stories,” Madden said. It’s so nice to be able to help. “