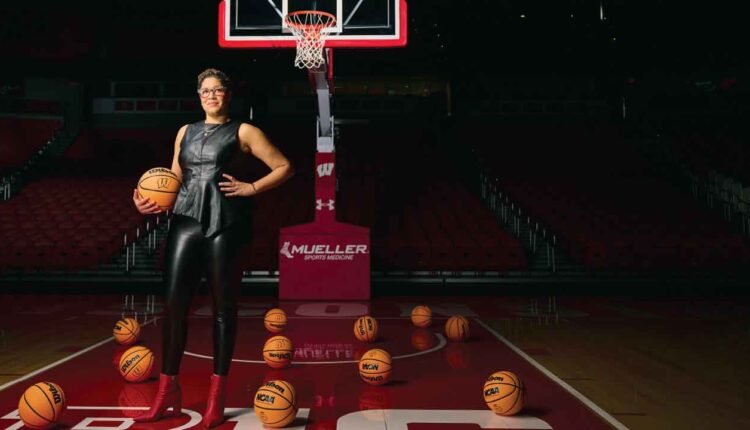 It might not be the first time Marisa Moseley took on a challenge – and it certainly wouldn’t be the last – but what happened two decades ago after her freshman year at Boston University is still very significant.

Moseley, 39, who became the head coach of women’s basketball at the University of Wisconsin-Madison last March, received a basketball scholarship from the BU. Her coach, Margaret McKeon, knew Geno Auriemma, the legendary women’s coach at the University of Connecticut – he now has 11 NCAA championships – and suggested Moseley work at Auriemma’s summer camp.

“I was very intimidated,” says Moseley. “I was 18 and went to the No. 1 basketball school in the country. I was nervous, but it was an incredible opportunity. “

That summer Moseley made lasting friendships with many in Auriemma’s circle.

“I showed up on time,” says Moseley. “I did what I was told. I had energy and a good attitude. “

Ten years later she was hired at UConn.

“I got the call to return as an assistant coach,” she says. “It changed the trajectory of my life.”

Classes? It’s never too early to make a lasting impression. And never shy away from a challenge.
Moseley doesn’t have that. In 2018, after nine seasons at UConn, she took the job as head coach at BU. Her alma mater had lost five seasons in a row. In their first year, Moseley led the Terriers to a winning record. In her third and final season, she played in the conference championship game of the Patriot League.

Turning the tide of UW Madison women’s basketball could be Moseley’s greatest assignment yet. The Badgers have lost records for 10 consecutive seasons. If you go back further, there were bright spots, but one step forward always seemed to be followed by two steps back. Volleyball soared; Women’s basketball spat. Nevertheless, one had the feeling that a competitive team could pack the Kohl Center.

“I’m looking forward to livening up the crowd,” says Moseley, admitting that this won’t happen overnight.
“I feel the time is right and we have a great combination of people.”

She has been playing basketball since she was 8 years old. She grew up in Springfield, Massachusetts. Her father started it. Moseley’s game in high school earned her the BU scholarship – she selected it for Hofstra University – and she was known among the Terriers for her defense: stealing the ball, fending off shots and eventually serving as team captain.

Her major was sociology – her mother was a sociology professor – and Moseley thought she would become a social worker after school.

“I wanted to be able to influence people’s lives. Lo and behold, I became a basketball coach and “, she laughs,” I’m a social worker. “

Moseley didn’t train straight away. She had taken communication courses at the BU and got a job as a production assistant at ESPN. After less than a year, she decided to become a coach.

“I realized that I am human and that I wanted to influence people’s lives and keep paying [to my players] what my coaches gave me, ”she says.

A good friend of Moseley, Morgan Valley – who played for UConn and met Moseley at Auriemma camp – immediately texted Auriemma.

“All the message said was ‘Marisa Moseley’ and [it gave] Marisa’s cell phone number, ”Auriemma later recalled. Meanwhile, Auriemma’s daughter, who Moseley knew from the camp, also advertised her.
“Everyone who had anything to do with Marisa raved about her,” Auriemma told the Hartford Courant.

The trainer called Moseley, who was initially annoyed.

“But then you lean in,” says Moseley. “It was a great opportunity.”

She was 28. “There are moments when you ask, ‘Am I ready? Am I able? ‘ But then you realize that they wouldn’t ask if they didn’t see something in you, “she says. “You have to face the situation.”

When Moseley left UConn for Boston after nine seasons, Auriemma made a statement: “BU is getting an amazing person who has the ability to transform the women’s program.”

In Boston, Moseley was the driving force behind the Patriot League’s decision to set up an Anti-Racism Commission and played “Lift Every Voice and Sing” – often called the Black National Anthem – at BU home games during Black History Month.

“We are also educators,” says Moseley. “We need to think about how we can use our voice and our platform to make real change.”

Moseley received the first call regarding the UW Madison job – from a search company interested in her – the day after her BU team lost the Patriot League championship game to Lehigh University last March.

“I wasn’t really happy then,” she says.

But after visiting Madison, meeting people, and considering the opportunity, she signed up and thought, “I know how to build and I know how to turn things around. I want this challenge. “

A sign hangs on her office wall: “Everything starts with an idea.” Moseley says, somewhat embarrassed, that she saw it on Instagram.

But her idea of ​​coming to UW-Madison and working hard to realize a vision and attract others to do it is not embarrassed.

“We will,” says Moseley, “transform it from an idea into a reality.”

Doug Moe is a Madison writer and former editor of Madison Magazine.

COPYRIGHT 2022 FROM MADISON MAGAZINE. ALL RIGHTS RESERVED. THIS MATERIAL MAY NOT BE PUBLISHED, TRANSFERRED, REWRITTEN, OR REDistributed.