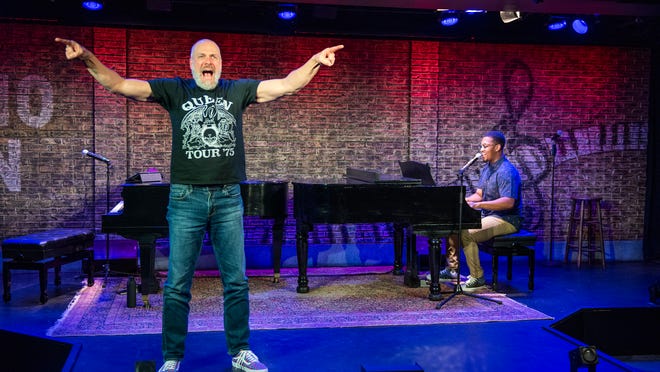 At “Piano Men” all that is missing is a tip glass.

Production coordinator Josh Hart feeds them pre-collected audience inquiries via computer tablets on stage. The two experienced entertainers play and sing these songs, with a lot of vocal support from the Stackner Cabaret audience.

The show, which opened on Sunday, welcomes the steadfast keyboardists from “piano bars / lounges / clubs / cabarets / cruise ships” to quote from Watts’ biography. With this format it will be different every night.

While the two pianists have much in common, their musical personality differences add to the enjoyment of the show.

Robinson underestimated the wattage when he called his piano partner “3,000 watts”. At least 10,000 – maybe 50,000! When he wasn’t playing or singing his lungs, Watts was directing the audience and giving them cues with his arms or face raids.

The gentler Robinson, often amused by Watts’ antics, got soulful with John Legend’s “Ordinary People” and Carole King’s “I Feel the Earth Move”.

The attraction of this format is that a desired song can be trashy or lame, but still entertaining. Case in point: Rupert Holmes’ “Escape (The Piña Colada Song),” which Watts wandered around to make fun of how ridiculous the lyrics were.

This show is not unlike a box of Bertie Bott’s every flavor beans. Occasionally, you get a taste that is not that outstanding. Robinson sang the requested “Imagine” with awe, but John Lennon’s secular anthem is an awkward point at a party like this.

But Sunday night’s hits, including Steve Miller’s “The Joker” and Elton John’s “Crocodile Rock,” got everyone clapping, singing, moving and doing strange sound effects through their masks.

When it comes to singing, the show emphasizes “Enthusiasm before Hübsch,” explained Watts, admonishing the audience. But this exuberant prankster had a lovely moment singing Simon & Garfunkel’s “America”, which was dedicated to a deceased friend.

A lightning-fast round of shouted inquiries towards the end was a whirlwind of “Thank you for being a friend”, “I Wanna Dance With Somebody (Who Loves Me)”, “Seasons of Love” and “Mamma Mia”.

“Piano Men” runs through February 27th, with Colte Julian taking over for Robinson from February 8th. Despite the show’s title, I see no reason why a future production can’t feature a woman on one of those piano stools.